The Pig War: When Britain and America Almost Went to War Over a Pig 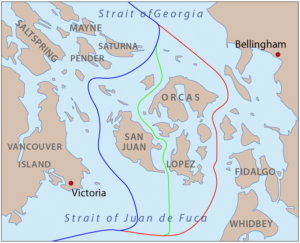 The San Juan Islands, which lie between Vancouver Island (modern-day Canada) and the State of Washington, were the site of a conflict between the United States and the United Kingdom in 1859 over the British-American border.

The Oregon Treaty, which was signed in 1846, designated the 49th parallel as the boundary between British and American territories in the Pacific Northwest. However, it made an exception for Vancouver Island, which was permitted to maintain its British sovereignty despite lying below the 49th parallel. According to the terms of the treaty, this western boundary kink was to be marked by the “middle of the channel which divides the mainland from Vancouver’s Island.” No one, however, could agree on which of the several tiny islands and canals in the Salish Sea served as the actual boundary.

San Juan Island unexpectedly itself in the center of a severe diplomatic crisis because it was located in a territory that both countries claimed.

To create a presence in the area and resist, competing, American claims in the San Juan archipelago, the British-run Hudson’s Bay Company constructed the Belle Vue Sheep Farm on San Juan Island in 1853. As soon as the company started to turn a profit, the Americans decided they too wanted a piece of the action. Within five years, more than a dozen US settlers had traveled over from the mainland to make applications for grazing rights, which the British judged to be unlawful.

Up until 15 June 1859, when an American settler by the name of Lyman Cutlar slaughtered a pig he discovered feeding in his garden in a rage, tensions simmered below the surface. Unluckily, the British were the owners of the offending animal, and they were so furious about the situation that they vowed to expel American residents in large numbers.

Unfazed, the Americans requested military protection. Captain George Pickett, who subsequently fought for the Confederacy in the American Civil War, responded to the appeal and was dispatched to the island. On July 27, he landed with a 64-man force not far from where American Camp is now.

As Pickett increased the number of his forces to 450, the British retaliated by deploying three cruisers to the region. The British began conducting live drills on San Juan Island as ships, field guns, and marines engaged one another in a tense military standoff, raising the stakes even more.

To resolve the conflict, President Buchanan dispatched high-ranking agents on the arduous trek west as soon as word of the “Pig War” reached distant Washington DC in October 1859. Their prompt presence reduced the tension, and finally, a truce was negotiated rather than resorting to military force.