3 Natural Disasters that Shaped the Course of British History

In the UK, Eunice caused damage estimated to be worth £360 million.

On February 17, the Met Office issued weather warnings for wind, ice, and rain that covered the majority of the UK; these warnings included red warnings due to a threat to life from flying debris throughout Wales and Southern England. The “danger to life” red warning informed residents of the northern coastlines of Cornwall, Devon, and Somerset in South West England to expect floods. A red alert was soon issued for London, the East of England, and South East England.

Schools, public spaces (including libraries), delivery services, sea crossings, and several bridges were also generally closed. The Humber, Queen Elizabeth II, and Orwell bridges were closed; the Severn and Prince of Wales bridge closures were the first times that both Severn crossings had been shut down at the same time and that the Prince of Wales bridge had been shut down because of wind. Due to concerns about high tide surges, the Langstone Bridge was closed for over three hours, leaving Hayling Island as the only access point to and from the community. The army had been put on “standby,” according to the prime minister, Boris Johnson. 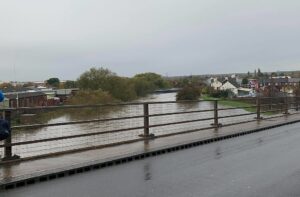 The United Kingdom had significant winter floods between November 2019 and February 2020. In November 2019, there was the first round of flooding that mostly hit Yorkshire and the Humber, the East Midlands, and the West Midlands. Before the second major wave of flooding, brought on by Storms Ciara and Dennis, occurred in February 2020, other localized flooding incidences were reported in December and January. With an average of 169.6 millimeters (6.68 in) pouring across the regions, the heavy rainfall made February 2017 in England and Wales the wettest month since records began in 1766, breaking the previous mark from 1833.

From December 18 to 22, flooding was recorded throughout southern England as a result of many, powerful cold fronts that passed through the region and gathered a lot of rain. The Environment Agency issued 237 flood alerts and 91 flood warnings in total. More than 50 mm (2.0 in) of rain poured in numerous places in less than 36 hours. The pre-Christmas rush, which is typically the busiest time of year for public transportation in the United Kingdom, was significantly disrupted by flooding. 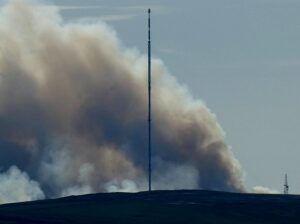 In the UK, a record-breaking number of wildfires broke out starting on June 24, 2018 and burned all summer long. The two biggest fires, which were both deemed serious events, started on Saddleworth Moor in Greater Manchester and Winter Hill in Lancashire, burning approximately 7 square miles apiece. Other sizable fires started in the Vale of Rheidol in Ceredigion, Wales, the Glenshane Pass in County Londonderry, Northern Ireland (640 acres), and Epping Forest in London. According to reports, the Saddleworth Moor fire is the biggest English wildfire in recent memory.

The majority of the wildfires took place during the first official heatwave to hit the United Kingdom since June 2017, which also happened to be the driest June in large portions of the country for more than ten years. These two factors contributed to the crisis by making June 2018 the hottest June on record for the country since 1995. Despite the rain, a wildfire that started on the Staffordshire Moorlands on August 9 quickly grew to encompass 219 acres by August 11. As of August 22, several hot patches were still burning. Over the year, there were 79 fires in all, setting a new record.