Europe has one of the world’s largest and most accessible rail systems, covering hundreds of thousands of kilometers. 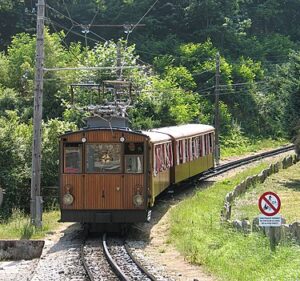 Inland from Saint-Jean-de-Luz, a charmingly old-fashioned rack- or cog train departs for the ascent to the Pyrenees’ westernmost summit. There are views of the Basque landscape and seashore the entire way. Although travelers embark in France, various Spanish establishments await them at their peak. Although the train travels back to the station, you could want to take the designated walk (two hours) down slopes where wild horses graze. There are plenty more intriguing railways to explore in the Pyrenees. 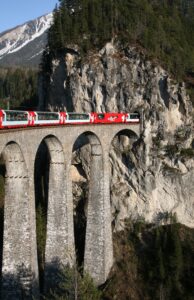 The classic rail journey across the Alps, this train boasts panoramic windows to maximize the breathtaking landscape; be sure to reserve a window seat. From St. Moritz to Zermatt, the entire trip takes eight hours through 291 bridges, 91 tunnels, and 2,033 meters of height. If you don’t mind figuring out the schedules, you can travel the same trip using less expensive trains. 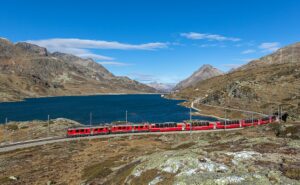 The Rhaetian Railway’s limited network was designated a world historic site by UNESCO in 2008 for its role in facilitating community development in the high Alps. The narrow-gauge route south of Saint Moritz is now mostly utilized by tourists, many of whom ride the Bernina Express, a train designed specifically for taking in the beauty. Before descending into Tirano, which travels through the streets into the station like a tram, the railway ascends 2,253 meters as it passes the Bernina Pass into Italy.

From the ancient Spanish city of Santiago de Compostela to the Romanesque city of Leon, travelers may travel on the opulent Transcantabrico sleeper train for over eight days.

The 643 km route provides vistas of the Cantabrian Sea and the verdant peaks of Asturias, as well as the opportunity to visit the Picos de Europa National Park and the beaches of Ribadeo. It passes via the northern coastal towns of Santander and Bilbao.

The journey highlights Northern Spain’s world-class cuisine and wine, stopping at some of the area’s most fabulous seafood eateries and providing a-la-carte meals while traveling. The train’s interior has 1923 Pullman carriages that have been renovated with opulent suites, jacuzzi ensuite bathrooms, and historic dining cars.

The three-hour trip from Jesenice, Slovenia, to Trieste, Italy, rises over the Julian Alps, passing beneath the most extensive stone arch bridge in the world (the main arch alone measures 85 meters), as well as the longest railway tunnel in Slovenia (6,327 meters). The 100-year-old railway was initially constructed to link Trieste, then an Austro-Hungarian port, with Western Austria and Southern Germany.

The Bohinj Railway now provides access to the area’s lovely paths for bikers, hikers, and wine lovers touring Nova Gorica’s vineyards. Staff members dress in the same attire as they did in the Austro-Hungarian Empire between 1900 and 1906, and a steam locomotive pulls the carriages from May to November.